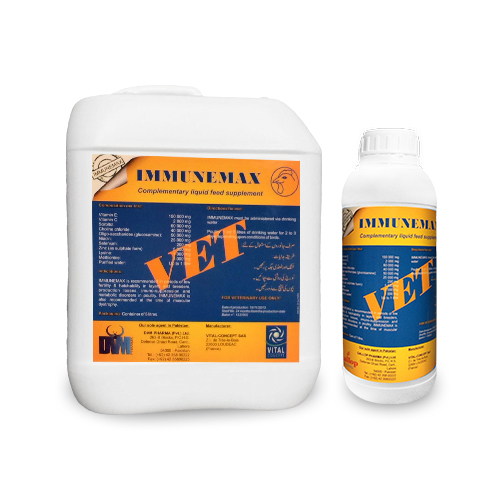 As now the poultry is being raised on the modern production techniques and well established growth production methods which have virtually addressed and eliminated nutrient deficiencies and now have moved to look for the genetic disorders. However, still the chicken growers and the companies both struggle against the microbes and the parasites. As, nowadays negligible quantities of antibiotics are used in the poultry feed formulation, both the chicken growers and the companies heavily depends on the vaccines and the immunity booster of highest order to combat with such situation. 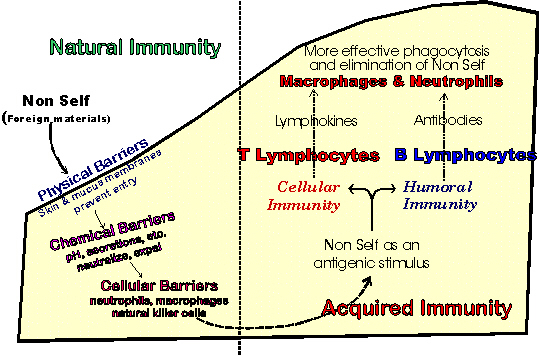 One can define immunity as the capability of the chicken to identify the presence of the material normally in the body as SELF, and to recognise and eliminate foreign body NONSELF objects. When a foreign/disease producing organism invades, the body of the chicken usually produces antibodies and some very specific cells whose job is to engulf, destroy and eliminate that specific foreign body. The foreign bodies that are recognized by the bird’s body as foreign body are called as antigens. In simple words, these antigens are the substances that can cause the immune system to develop a defence against that invading foreign particle, this is immune response of the body. Although its really important to realise that the modern development of science has often been able to separate and identify from or weaken in the disease causing microbes so that the bird’s body becomes immune to that microbes without getting in to the diseased condition. Now some of the proteins are good antigens that are readily recognised by the immune system and will produce effective immunity. other materials like carbohydrates are not very effective antigens, so the immunity may not be enhanced on exposure. Once the bird’s immunity/immune system has detected and responded to an antigen (either from microbe/vaccine) antibodies are produced and start circulating in the body fluids. However, if the bird is exposed to that stimulus again it responds abruptly as it remembers the previous encounter with that microbe/vaccine. This immediate responce of the immune system saves the bird from catching the disease or shorten its duration and weaken its severity.

Almost every disease has same three phases of the progression i.e infection that leads to development of immunity and finally recovery.

Why Immunemax as No.1 Choice for immunity enhancer!!??

Immunemax with the very different and effective composition stands tall with all the competitive advantage in every expect by not only optimising immunity but overall condition of the body. It has a best cocktail composition that includes Vitamin E, Vitamin C, Sorbitol, Choline Chloride, Oligosaccharide (glucosamine), Niacin, Selenium, Zinc, Lysine and Methionine.

Vitamin E – In the all living organisms especially fast growing birds like commercial poultry utilize oxygen to metabolize and use the dietary ingredients/nutrients in feed in respect to produce energy for its survival. Oxygen is the vital component for living of the cells and eventually the organism as it mediates chemical reactions that metabolize carbohydrates, proteins and fats that eventually produce energy. But on the other hand oxygen is the double edged weapon and is highly reactive atom which has all the capability to become potentially demaging molecules generally known as “Free Radicals”.

Vitamin E is known to be essential for integrity and optimum function of reproductive, muscular, circulatory, nervous, and immune systems (Hoekstra, 1975; Sheffy and Schultz, 1979; Bendich, 1987; McDowell, 2000). It is well established that some functions of vitamin E, however, can be fulfilled in part or entirely by traces of selenium or by certain synthetic antioxidants. Even sulfur bearing amino acids, cystine and methionine, affect certain vitamin E functions. Considerable evidence indicates there may be undiscovered metabolic roles for vitamin E, which may be paralleled biologically by roles of selenium and possible other substances.

Vitamin C – has been known to be involved in a number of biochemical processes. Function of vitamin C is related to its reversible oxidation and reduction characteristics. Franceschi (1992) reports that vitamin C is required for differentiation of connective tissue such as muscle, cartilage and bone derived from mesenchyme (embryonic cells capable of developing into connective tissue). The most clearly established functional role for vitamin C involves collagen biosynthesis. Beneficial effects result from ascorbic acid in the synthesis of “repair” collagen. Failure of wounds to heal and gum and bone changes, resulting from vitamin C undernutrition. The main functions of the Vitamin C in the bird’s body are –

So, its the major part of the composition of Immunemax and with other components have the best synergistic impact on the bird’s body.

Sorbitol- it is the sugar alcohol with the 60% sweetness as compared to the table sugar (Sucrose). It is the direct source of energy for the immuno-depressed organism. It may also act as non-stimulant laxative via oral route.

Choline Chloride – prevention of perosis and liver enlargement in chicks, helps in utilization and outward movement of fat from the liver and prevent from condition known as fatty liver. It has a very important role as the precursor for the acetyl choline synthesis, the transmission agent for the impulses that runs by sympathetic nervous system. Few more functions are as under

Oligosaccharide (Glucosamine) – being the active component of the Vital Liver + keep a track of the joint health and saves from a condition known as the osteoarthritis.

Niacin – The major function of niacin (Vitamin PP) is in the coenzyme forms of nicotinamide, NAD and NADP. Enzymes containing NAD and NADP are important links in a series of reactions associated with carbohydrate, protein and lipid metabolism. They are especially important in the metabolic reactions that furnish energy to the animal.

Selenium – The antioxidant function of vitamin E is closely related to and synergistic with the role of selenium. Selenium with combination with vitamin E and Vitamin C has shown significant effect on the antioxidant property of the poultry meat when administered in feed (Bou et al., 2001; Bou et al., 2005; Surai, 2002; Surai et al 2002; Açikgöz et al., 2011; Halici et al., 2011; among others). Among these components vitamin E demonstrated the highest biological efficiency in preventing the lipid oxidation in vivo (Barroeta, 2007).

So, the above mentioned reasons make it a complete solution for the immunity enhancer of the bird and to some extent protect the birds against the infections.

Zinc – is the very essential trace mineral in all organism ranging from bacteria to plants and animals. It is primarily absorbed in small intestine provided other other food ingredients as they can influence its bio-availability. In poultry for instance the phytate negatively effect the absorption of Zinc.

Lysine – Amino acids such as Lysine and Methionine used as supplementation in poultry production now play very important roles in improving the efficiency of protein utilization in animal feeding. L-Lysine is the 100% digestible and utilisation is better than the vegetable protein bound lysine and makes it “leading amino acid” in poultry supplementation of micro ingredients.

the main functions of the lysine are as under –

So, as a whole Immunemax is the combination of the ingredients that have the best synergistic effect on each other and eventually lifts up the bird and supports it at its best in hard times of the disease infestation, disease challenge areas where viral diseases are prevelant and especially in the early, mid and last part of the lifecycle of the commercial poultry.